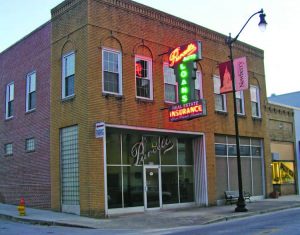 Purcells, formerly Newberry Insurance & Realty Company was opened in 1905 by Mr. S. P. Boozer in the old post office building. At Mr. Boozer’s death in 1910, Mr. James A. Burton bought the agency, which was operated as a privately owned business. Mr. Burton did an extensive business writing all classes of insurance, selling stocks and bonds, real estate, and loans. During the depression in 1921, the Life Insurance Company of Virginia loaned Newberry County farmers $125,000 through Mr. Burton. After Mr. Burton’s death in 1925 his secretary continued the business until September 1927, when Mr. C. E. Monts of Little Mountain and Mr. A. H. Counts of Newberry bought the agency.

In January 1929 the Spearman and Wallace Agency bought the interest of Monts and Counts and the office was moved to the Exchange Bank Building and incorporated under the name of Newberry Insurance and Realty Company with Mr. W. R. Reid, president and W. B. Wallace, vice-president. In January 1930, when Mr. E. B. (Ned) Purcell became president and Mr. Joseph L. Keitt, Jr. became vice-president, the capital stock increased to $25,000. At that time the agency entered the field of automobile financing along with their general insurance business.

Currently Ben P. Stewart is the vice-president of Purcells and has worked for the corporation for 61 continuous years since 1947. Christy J. Bouknight joined the staff in 1986 and Sherrie Shealy Fulmer joined in 1990. Russel W. Shealy came on board in 2002 as a licensed property and casualty insurance agent.

Today Purcells offers all types of property and casualty insurance such as home, auto and commercial as well as consumer loans up to $20,000.